Felix has always been a builder, but about a year ago he really got into Lego.  Whenever he wanted to build something, Felix and Max would haul out their plastic bin filled with Lego and dump it all over our living room floor.  That in itself is a nuisance, but when you add that our living room contains a shag area rug, you have the making of a nightmare.  I finally got tired of Lego-sized indents in my feet and spending time blindly running my hands through rug fibres to try to find lost pieces and decided to do something about it.

I wanted a space where both Felix and Max would have space to build, a Lego table with storage so that all the pieces they would need would be at their fingertips (and more importantly, off of my floor).  I also wanted something that would relatively cheap to build because, let’s face it, Lego is expensive enough by itself.  So here is how I checked those items off my list.

Tools and items I used:

Now before I get too far in, if you are wary of playing with power tools, you could still make a great Lego table with just a few baseplates and a coffee table.  All you would need to do is superglue the baseplates down and you would be done.  But on to the upgraded option…

To start, I unscrewed the legs off wooden table so that I could reach all parts when I was cutting.  Then I measured how big my plastic bins were and how much space I would need to fit 4 Lego baseplates on each side.  Originally we had planned to use large Ikea storage bins in the table, so I traced an outline of the bins, drilled a small hole into the table (big enough to put the blade of the jigsaw into), and went about cutting out the hole that the bin would fit into perfectly.  Too bad it was my first time using a jigsaw and my cut was a little outside the lines.  Or a lot outside the lines.  The holes were too big for the bins, so it was time for plan B.  I had saved two of the plastic drawers that were originally part of a Walmart Rubbermaid three drawer dresser/organizer.  We had the dresser for years but one of the drawers was broken and I couldn’t bring myself to throw out two good drawers when they could be used for something.  Well, they finally got their time to shine.  They were much wider than the Ikea bins and they fit under my (once too-large) freshly cut out holes. 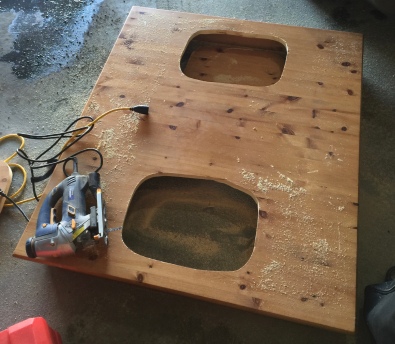 As you can see, the hole I cut was a little *ahem* less than perfect.

Once the cutting was done, I sanded down the edges around the holes.  I knew that my guys would be reaching into the bins and I did not want any chance of slivers.  I used my Dad’s sheet sander (thanks Dad) and his box of various sandpaper.  I started with the 80 grit to get rid of the rough edges AND to sand the existing finish off of the table.  I knew I was going to be painting it and so I wanted to make sure I got off all of the old varnish.  Then I sanded with the 120 grit sandpaper and finished it off with a 420 grit (the higher the grit number the softer/finer the sandpaper).  I wiped the table down with a damp cloth to make sure that it wasn’t covered in dirt and dust before I painted it. 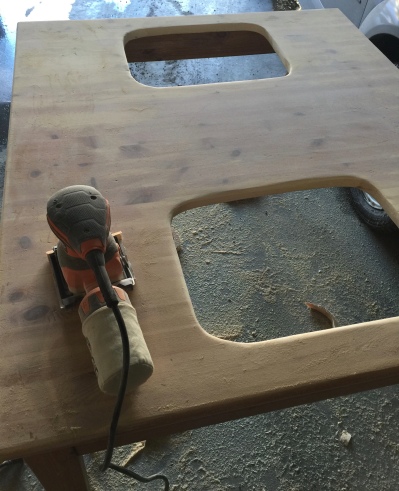 Since I made this Lego table during the winter I had to do the painting inside.  I put a plastic tarp down in our basement and set to work.  The paint I bought was a paint and primer so I only ended up having to do two coats.  I also knew that most of the surface of the table would be covered by baseplates and so I let my inner perfectionist sit out for this one.  After the paint was dry, I finished it with two coats of Minwax Polycrylic to protect the paint (it is my go to top-coat product because it is so easy to use and dries fast).

Once the paint and Polycrylic were dry, I flipped the table upside down and used steel strapping to secure the plastic bins to the table.  Originally when I was going to use the Ikea bins, I thought that since they had an edge to them they could sit in the table without support.  However, since I messed up the jigsaw cut and now had to under-mount the bins, I had to figure out a solution.   I remembered when our basement was being finished seeing steel straps around the ductwork suspended from our ceiling.  So off to Home Depot I went and after trying to describe what I was remembering in my head, a friendly employee led me to a small section designated for steel strapping.  Turns out, steel strapping is inexpensive, very sturdy (the 22 gauge I bought can hold up to 110lbs, which I was very thankful for the morning I found Max sitting in one of the bins and happily building Lego), and is easy to cut (if you have snips that will cut 22 gauge steel; if not, Home Depot sells those too).  They also have holes in the strap so you can fasten them easily.  I used wood screws to fasten the straps to the table and made sure to have 2 straps running length wise and one strap running width wise. 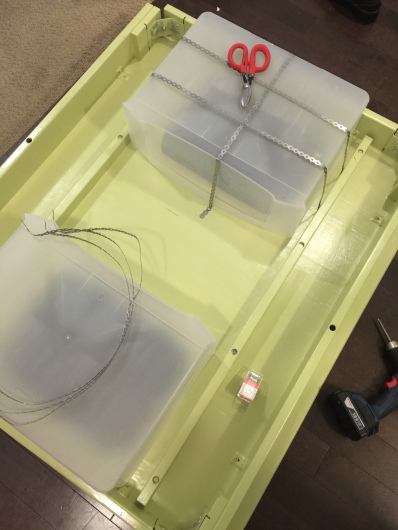 Screwing on steel strapping to secure the bins.

After securing the bins I used superglue to glue on the baseplates.  Now I was about to line up the baseplates so that each edge would be touching when my husband thankfully stopped me.  He took out a piece of Lego and showed me that there had to be a small space between each baseplate so that you could build across two of the plates.  If you glue the baseplates so that they are touching each other then you would be confined to the perimeter of each single baseplate.  So we glued down the first baseplate and then made sure to put a couple of pieces of Lego on the edge of the glued plate so we could connect it to the subsequent baseplate and mark down where it would go.  Once all the baseplates were glued down and dried, the Lego table was ready.  It turned out better than I thought it would and I’m constantly being asked about it.

Felix and Max were over the moon to discover that they had a designated Lego space, and my feet have thankfully been Lego-free ever since.