I am in no way a runner.  My version of running is chasing after Felix and Max, but I’ve always admired those who run and do it with such grace that they look like gazelles moving effortlessly.  For me, after 15 minutes pounding the pavement, my knees are waving the white flag and even my brain feels jostled.  However, the one thing I have learned is that there is much more to running than I thought.  Besides the various techniques, footwear and apparel that go with running, there is also a vast difference in terrain.  Enter trail running. 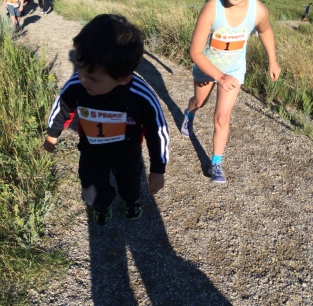 My first taste of trail running was jogging beside Felix in a 5 Peaks Adventure Race.  He was 4 years old at the time and both of us had never been to any sort of official running race.  In fact, before this, the combination of the words “running” and “race” were an instinctive deterrent.  However, Felix has always liked running and so I thought I would lace up the sneakers and join him.  The race was held at the Canmore Nordic Centre, which is nestled in the mountains with gorgeous scenery everywhere.  We had no idea what to expect, but the volunteers and organizers at 5 Peaks made the process seamless.  We registered, Felix got a race bib and since this was his first race, he did the Children’s Challenge 1km free fun run.  1km turned out to be the perfect introduction for both of us because Felix could see the whole course and we could both easily run the distance.

Turns out trail running is very different than the type of running I was used to.  My knees were totally fine and it brought back memories of running around outside with my brother when I was little.  Instead of being fixated on when the race would end, my focus was on the trail, the trees and the jaw-dropping backdrop of the mountains, and before I knew it we had crossed the finish line and Felix was asking to go again.  It was a definite success for his first run and an eye-opening experience for me.  The kid’s fun run is the only race for which you can register on the actual day, so that was it for us for the day, but we stayed to cheer on the other runners and buy some 5 Peaks swag. 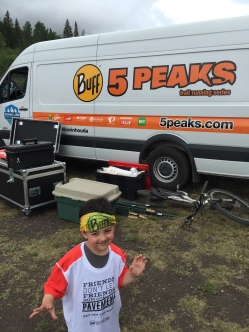 With 5 Peaks there are a couple of race options available.  They have the 1km free fun run for kids, a 3km timed kids run, a 6-7km Sports run, a 10-15.5km Enduro run, and depending on the location and particular race series they also have half marathons.  Basically there is a race for all different ages and abilities.  5 Peaks races are held in B.C, Alberta, Ontario and Quebec.  There are a ton of different races to take advantage of, and the organizers and participants have created such a fun, energetic and supportive community that we were really impressed and Felix is definitely now a 5 Peaks fan.

Check out this year’s race lineup here.  Bring the whole family and remember what it is like to run for fun again.